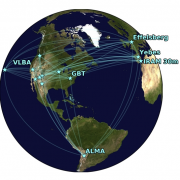 Including the powerful ALMA into an array of telescopes for the first time, astronomers have found that the emission from the supermassive black hole Sagittarius A* (Sgr A*) at the center of our Galaxy comes from a smaller region than previously thought. This may indicate that a radio jet from Sgr A* is pointed almost toward us. Please find more information on the Press Release. 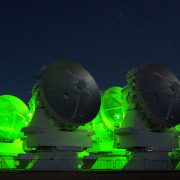 It is expected that phased ALMA will participate in some GMVA observations during ALMA Cycle 7 (Oct 2019 – Sept 2020).
There are likely to be ~43 ALMA antennas available to the ALMA observation, but the phased sum used for VLBI may be constructed only from those that lie within a circle of radius 0.5 km. GMVA session dates for 2020 are not yet fixed but Session I in 2020, which is traditionally in the period March-May, would provide an opportunity for GMVA + ALMA observing.

More details can be found in the ALMA Science Portal 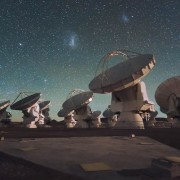 The Joint ALMA Observatory (JAO) will start the next cycle of observations (Cycle 7) in October 2019. A Call for Proposals (CfP) with detailed information on Cycle 7 will be issued in March 2019, with a deadline for proposal submission in April 2019. This pre-announcement highlights aspects of the Cycle 7 proposal Call that are needed to plan proposals.

More details can be found in the ALMA Science Portal 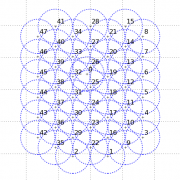 Over the course of the last several months an issue in CASA mosaic imaging was recognized. The Observatory elected to understand and characterize the issue before informing the user community of potential impacts on the resulting images. The CASA team has now identified a couple of issues using both the 7-m and 12-m arrays over the course of the past few cycles and CASA releases. The full extent of the data affected is still being investigated.

You can read further details on the identified issues in this link to the Science Portal. 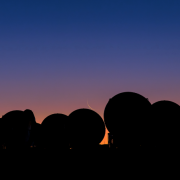 A detailed report on the outcome of the ALMA Cycle 6 Proposal Review Process is now available. The report details the proposal review process, proposal statistics, and regional distributions, as well as the proposal distribution across science categories and receiver bands.

The report can be downloaded as a pdf document.

The highest priority Cycle 6 projects are listed at this link.

You can find the original announcement in the Science Portal. 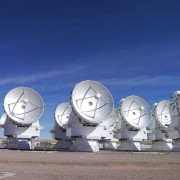 The ALMA Observatory announces four filler programs that have been approved on the Atacama Compact Array (ACA), also known as the Morita Array. The programs were designed to fill a gap in the ACA observing schedule in the remainder of Cycle 5 between LST of 22 and 1.5 h. The programs were selected based on input from scientists at the Joint ALMA Observatory (JAO) and the ALMA Regional Centers (ARCs). The proposed programs were reviewed by the ALMA Integrated Science Team (IST) with final approval by the ALMA Director.

The approved programs are:

2017.A.00056.S:The nature of Planck compact sources at 353 microns
This project will conduct a survey of Planck sources at high galactic latitude in the Band 6 continuum to determine the nature of these sources. These observations could also potentially identify new calibrators for ALMA high frequency observations.

The data from the proposals will be quality assessed by the JAO and released through the ALMA Archive with no proprietary period. Any remaining PI science programs and activities to commission new capabilities on the array will have priority, and therefore the above programs may not be completed in full.

Link to the announcement in the Science Portal:
https://almascience.eso.org/news/alma-announces-new-aca-observatory-filler-programs-for-cycle-5 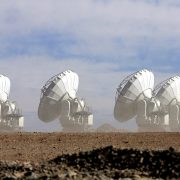 The list of ALMA Cycle 6 high priority projects is available online at the following link: 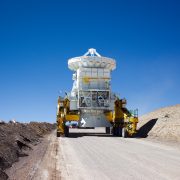 The ALMA Board approved the ALMA Development Roadmap for the next decade. The current development priorities as based on scientific merit and technical feasibility, are:

These developments will advance a wide range of scientific studies by significantly reducing the time required for blind redshift surveys, spectral scans, and deep continuum surveys. In order of scientific priority, receiver upgrades are recommended for intermediate (200-425 GHz), low (< 200 GHz), and high (> 425 GHz) frequencies. The Board acknowledges that there are other potential development areas for the future for which the science cases and technical feasibility need to be further demonstrated.

A document summarizing the development priorities for the Observatory out to 2030 is presented here:

You can directly access the PDF document at alma-development-roadmap.pdf.

A detailed report of the Cycle 6 Proposal Submission Statistics is now available at the Science Portal.
The report provides a summary of items such as the number of submitted proposals and time requested, subscription rates, and comparisons with the number of hours requested in previous Cycles. 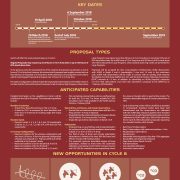 The ALMA Director, on behalf of the Joint ALMA Observatory (JAO) and the partner organizations in East Asia, Europe, and North America, is pleased to announce the ALMA Cycle 6 Call for Proposals. It is anticipated that 4000 hours of the 12-m Array time and 3000 hours of the Atacama Compact Array (ACA) time, also known as the Morita Array, will be available for successful proposals from Principal Investigators (PIs) in Cycle 6.

You can find the Call for Proposals at:
https://almascience.eso.org/proposing/call-for-proposals.

In the following link you can also find a poster prepared by the EPO department at JAO with a summary of the new capabilities offered in Cycle 6:
ALMA_Cycle6_Capabilities_Poster