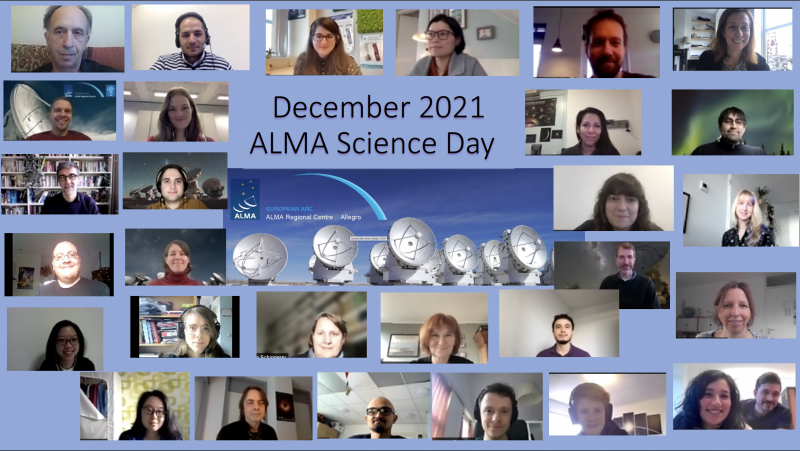 The 5th Netherlands ALMA Science day was hosted by the Allegro team on the 29th November, 2021. For the second time in a row this was a fully on-line version.

The scientific program included invited and contributed talks highlighting results of projects with all or part of the data taken by the ALMA telescope. The invited speakers for this special day were Dr. Alice Booth (Leiden Observatory – The Netherlands), Dr. Eva Schinnerer (MPIA – Germany), and Dr. Gergö Popping (ESO – Germany).

Then, Dr. Popping presented the current status of the ALMA telescope, including a summary of the return-to-science-operation-process, the end of Cycle 7 and the beginning of Cycle 8, as well as results of the analysis from the Proposal handling team of the proposal review process for ALMA observing Cycle 8.

Moreover, the program included 10 contributed talks by researchers from MPIfR, Leiden Observatory, ASTRON & Kapteyn Astronomical Institute. The contributed talks spanned over topics, frequencies (wavelengths), and spatial scales: Results from measurements towards the gaps of planet-forming disks to observations of molecular gas interacting in the circumnuclear disk of Active Galactic Nuclei using ALMA and also MATISSE were presented. The program also had contributed talks showing results of observations of high-z, massive, and active ultra luminous infrared galaxies or zooming in on the environment around the most famous black hole thanks to the Event Horizon Telescope project.

P.d. The records of the Science day will be edited and made available for public access on the Allegro social media channels.